Fadimatou Owona, Bernard Ombiono and Abdouraman Ala Zi Iya received certificates of recognition during the celebration of “la Grande nuit des travailleurs” held in Yaounde on the 29th of April 2022.

In prelude to the International Labour Day, “la Grande nuit des travailleurs” took place at the banquet hall of the Cameroon Red Cross on the evening of Friday, the 29th of April 2022. An initiative of the Agence camerounaise de la communication (ANACOM), to celebrate the most deserving employees of selected public and private administrations. 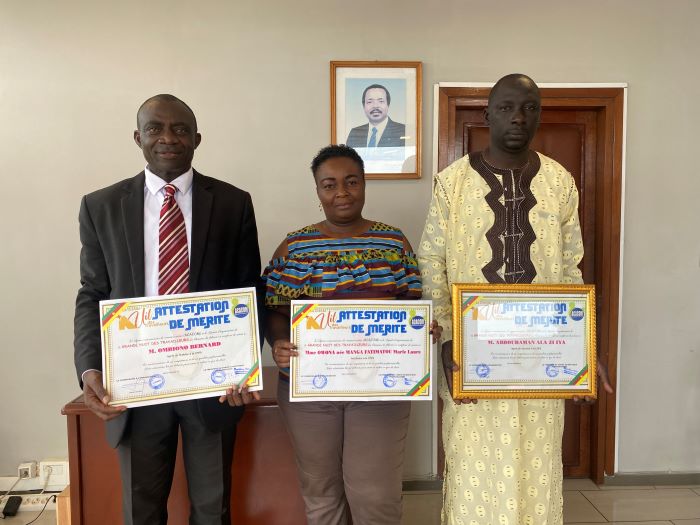 Relating to the National Social Insurance Fund (NSIF) structures in Yaounde, the three best staff mentioned above were selected on the basis of the average evaluation marks obtained during the last three years, as well as their excellent disciplinary record for the same period. With an average of 20.3, Marie-Laure Fadimatou Manga Owona, the DFC's BOL head, came in first place, followed by Bernard Ombiono, mail unit head, who obtained an average of 20.28, and in third place, Abdouraman Ala Zi Iya, watchman at the Directorate General, with an average of 20.19. They received certificates of merit and many other bonuses.

Indeed, it was an unexpected honour, when workers from all over the world are celebrated their Day. Bernard Ombiono said: "I was not expecting it when the DRH told me that I was one of the best workers of the NSIF, by giving me my participation ticket for this event". Also, on behalf of himself and his two other honoured colleagues, he added: "We are satisfied. We promise to always do better, even beyond. So that, the objectives assigned to us shall always be achieved”. He concluded by saying to the Top Management: "This is also an opportunity for us to thank the Directorate General for this mark of recognition; by allowing us to take part in the event".