On Tuesday the 29th of June 2021, a delegation from the MINPOSTEL went to the Documentation

and Records Unit of the NSIF to learn about the digitisation process of documents.

The visit of the MINPOSTEL delegation, leads by Mr Ismaila Hassoumi, Head of the Documentation Centre, began with the warm welcome of Mrs Akamba Thérèse Marcelle, the Documentation and Records Unit Head. Mr Ismaila said: " We are here to learn the techniques and process of digitisation, what exactly has to be digitalise, as well as problems involved in the recording process". In response to Mr Ismaila concerns, Mrs Akamba presented with ease and dexterity the role and importance of electronic recording for a company. 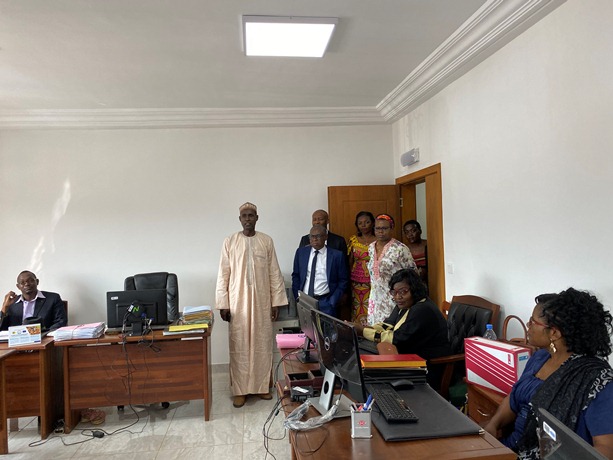 Then, Mr Ismaila and his team exchanged with Mrs Akamba on various digitisation process. She explained: "We encounter several difficulties to implement digitisation, as it often requires hard copies of documents that shall firstly exist and be organised, after we have to carry out a study that shall define the recording policy". Furthermore, the MINPOSTEL and the NSIF defined their framework for consultation related to the way to organise records.

During the exchange, Mrs Akamba expressing herself in both national languages, explained MINPOSTEL the different process involved in organisation process of documents. "It is necessary to proceed to an elimination of the superfluous copies which allows to save space; but also to a separation of files according to their typologies and to take into account the retention period of useful data before archiving ".

The MINPOSTEL delegation visited the NSIF premises.  Then, Mr Ismaila had the opportunity to appreciate the changes carried out in the NSIF recording process; a technique that he and his delegation came to learn.  He concluded by saying: " We got knew knowledge today and we are very satisfied, because we did not need to travel abroad to get them. We advise other structures to come and learn at the NSIF, how they can implement the digitisation of their files ".